ERC1400 is the best for developing security token offering ICOs were great but the inability of abiding with the regulation made it like sea water; great to surf on but not fit for drinking. We needed something more mature which allowed the benefit of ICO with regulatory compliance.

The road ended up to STO, but I guess - A. P. J. Abdul Kalam rightly said - “Excellence is a continuous process and not an accident.” Thus, thoughtful developers came with security token standards and then stepping stone was laid named ERC-20 on which solidarity moved to bring something colossal, a landmark in the continues journey ; ERC1400.

Why ERC1400 is important and why so much buzz is there calling it the best for STO ?

Let’s dig deep to find out.

First, it’s the motivation which makes it a solid contender amongst all. Authors of this standard - Adam Dossa, Pablo Ruiz, Fabian Vogelsteller and Stephane Gosselin, are all ethereum developers and have real insights as to what are the shortfalls in Security Tokens.

They described their motivation as follows “ Accelerate the issuance and management of securities on the Ethereum blockchain by specifying standard interfaces through which security tokens can be operated on and interrogated by all relevant parties.”

They want to build a standard which is capable of handling every situation and has every function right from document management to control and error signaling. It has reverse compatibility; this means ERC1400 standard support ERC20 standard and which can be even being extended to ERC777. This allows ERC20 and ERC777 based tokens to adapt features of ERC1400.

ERC1400 brings the virtual world a step closer to the real world. ERC1400 allows having forced transfer known as controller transfer with transparency. This allows handling situations with ease, where there are legal dispute and court order. This is a big step and a much-needed one when issuing security tokens. It can also help in situations when a person has lost private key, as it’s not possible to lose security in the real world, this standard brings such applicability to digital as well.

STOs are more complex than ICOs and require more functions to control the transfer. ERC1400 standard brings in place functions to implement conditions relating to transfer, either by embedding in smart contract or on-chain rules or specifically defining condition using embedded transfer with Data function. All this allows implementing lock-in period for securities and authorizing transfer only when the sender and transfer are KYC compliant.

ERC1400 also have functions to set the status of the token issue; whether issuance is finished or not and increase total supply as well. In addition to this, ERC1400 have provisions for token redemption as well, with allowing conditions being implemented that were used at the time of sending.

ERC1400 allows implementing a function, through which the transfer can be checked before actual execution. This not only checks but returns the reasons for failure on the basis of the status code table of EIP-1066. This would save all the cost & energy which would have been consumed while actual execution of a transaction resulting in failure. With ERC1400 tokens can be “Partially Fungible”.

Before ERC1400, a standard had the ability to hold either “Fungible Tokens” or “Non-Fungible Tokens”, but ERC1400 standard can have both. This allows creating a partition and combining it with metadata so that each user can have fungible tokens having same underlying assets; but that would not be same to other tokens in an economy being differentiated by metadata attached to it. Also, a user can have fungible tokens in one partition and those in the other partition could be non-fungible. It can be a super solid way to define voting rights by creating partition or tranches.

Another thing which real-world securities do have is documents and ERC1400 bring those to Security tokens as well. With ERC1400 we get document management, it allows to attach documents, whether legal or for reference, to security tokens.

Through this, issuer or any authorized party can get these documents to token holders very swiftly. This document can be even in a hash format on the chain so as to ensure that content is original and has not been tampered, making everything more secure and reliable. It has all the embedded functionalities to attach a new document or update anything like the hash of the existing ones.

With ERC1400, team of Polymath and other developers are working on a practical approach. This is to bring Security tokens to larger usage, whether functions to control and revoke transfers or introduction of partially fungible tokens. It makes ERC1400 a standard, which can solve most of the problems to which actually security tokens relate. It’s like having ERC20 standard for security tokens.

Through ERC1400, tranches can be made and more and more use cases can be involved, even the most cases which demands different rights and restrictions to different tokens, token holders and even transactions. Also, it would help to curb money laundering and terror funding, by allowing revoking the transaction and transfer funds back to the previous wallet, if the funds' availability allows doing so.

An additional benefit that it provides is to treat issuance and redemption as a standard event like transfer and metadata; transaction parameters can be modified on-chain as well as off-chain. ERC1400 is a bouquet of flowers, having hand-picked flowers like -ERC1410, ERC-1594, ERC-1644, ERC-1643, ERC-20, ERC-1066, satisfying everyone’s’ smell sense with distinct fragrances. 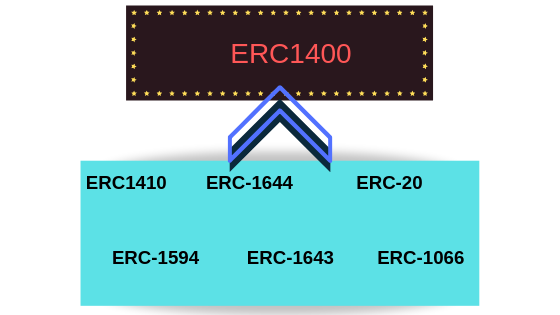 Though ERC1400 is still a draft and open for further work and tweaks under review, it will get better and polished by the hands of Ethereum Community before it becomes one like ERC20; fully ready for commercial implementation. It will become a standard that would be able to generate tokens, which would be transparent, secure and complaint all at once.